Two Are Better Than One: "Mystic Minnie" Selected at Cynon Valley Film Festival

In an extremely fantastic turn of events, "Mystic Minnie" has also been selected for the Cynon Valley Film Festival in Aberdare, South Wales alongside "The Breaking". "Mystic Minnie" has already collected awards for Best Original Script and Best Actress (Sarah O'Toole) and Honourable Mentions for Best Short Film, Best Acting (Cast Ensemble), and Best Director (Barry Smyth). "Mystic Minnie" was the product of the rich history of the village near where Barry Smyth was raised a
109 views

We are hardly able to contain the excitement of the news that Sarah O'Toole, the star of "Mystic Minnie", has won the Best Actress award in the Reale Film Festival. Sarah's flawless portrayal of "Minnie" is truly deserving of the award and it feels really good picking it up this early in the festival run. Hopefully, this is a recurring theme. This, coming off the heels of the recent Honorable Mention for Best Acting, is truly amazing. Sarah is a writer/director/performer and
102 views

The 13th Underground Cinema Film Festival in Dublin has just notified us that they have officially selected "Mystic Minnie" as part of their program for 2022. This year they will back in full swing after two years of the pandemic as they host live (as well as online) screenings and events from Friday, September 16th to Sunday, September 18th at the Royal Marine Hotel in the beautiful seaside town of Dun Laoghaire. We hope to see you there! See the Official Trailer below: #dol
25 views

A massive congratulations to Barry Smyth for receiving the well-deserved "Best Original Script" award for his writing on "Mystic Minnie" in the most recent edition of the London International Monthly Film Festival. Barry Smyth is an extremely talented writer that, is not only a fountain of ideas, wastes no time in putting pen to paper. "Mystic Minnie" is but one of his many brilliant works, so it's extremely exciting to see him receive direct recognition with this award. In a
81 views

"Mystic Minnie" has received Special Mentions for Best Short Film, Best Directing, and Best Acting in the Athens International Monthly Art Film Festival. This is the first festival to reach its award stage for the film so we are undoubtedly excited for this result. This is a testament to the hard work, sacrifice, and dedication by all members of the cast and crew to whom we are truly thankful. The Best Directing Special Mention goes to Barry Smyth, who not only wrote the shor
80 views

We are delighted to announce that "Mystic Minnie" was selected in the first film festival that it has been submitted to and that has reached its notification date, the Stockholm City Film Festival. We will know of its nomination/award status by August 25th. An American couple become the center of attention in a rural pub in 1950s Ireland when wagers are made on the wife's psychic abilities. Eugene (Paul Murphy) and Carthy (John Barrett), two local pub dwellers from a small vi
84 views 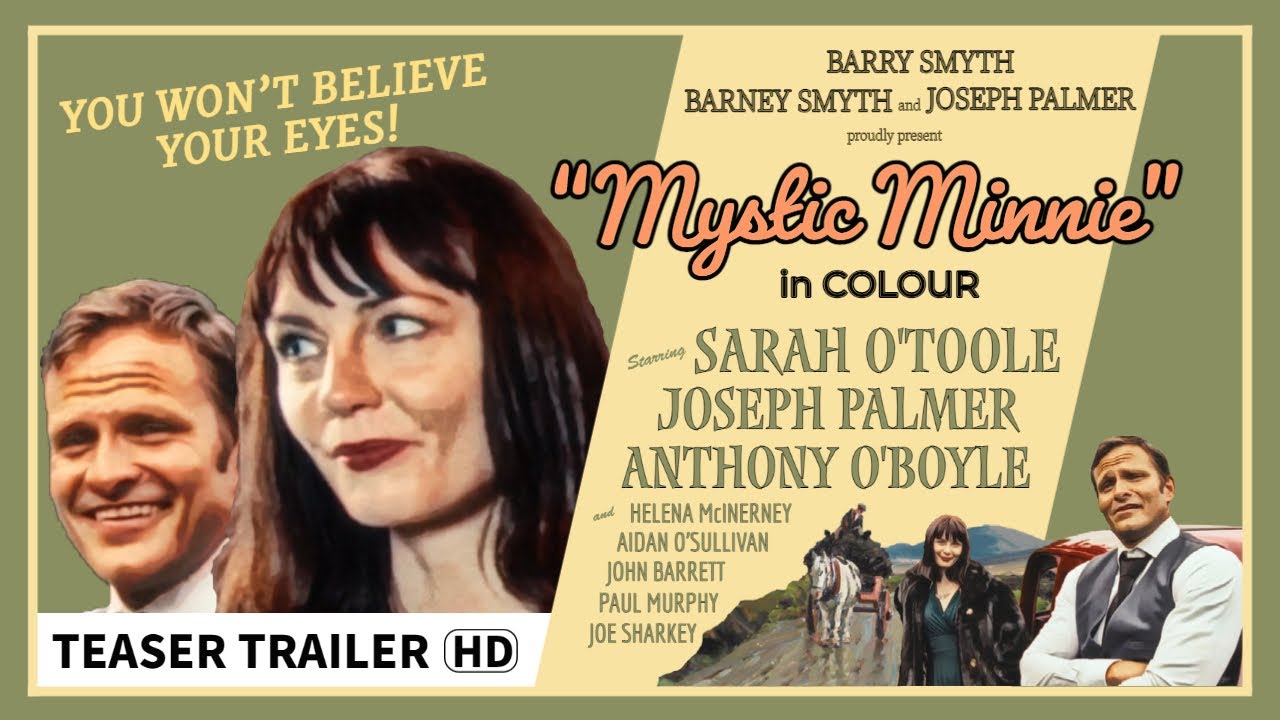 We are excited to finally share the official trailer of "Mystic Minnie" with you! The film has just recently begun its maiden voyage into festival land. Stay tuned as we share the progress. Meanwhile, enjoy the trailer! An American couple become the center of attention in a rural pub in 1950s Ireland when wagers are made on the wife's psychic abilities. Eugene and Carthy, two local pub dwellers from a small village in Ireland, share their outrageous gossip of the morning’s ev
475 views

An American couple become the center of attention in a rural pub in 1950s Ireland when wagers are made on the wife's psychic abilities. At long last, "Mystic Minnie", our 1950s period comedy set in rural Ireland, has come out of post-production and will be making the festival rounds. It features an ensemble cast of excellent actors, each perfectly cast for their roles. The star, Sarah O'Toole is a well-known and respected actress, acting instructor, and director in theatre. O
153 views